Because She's Worth it 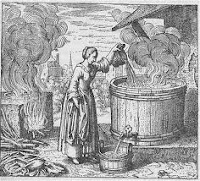 When people think of important French female chemists, they will more often than not come up with one name, Marie Curie. Yet there is another Marie, Marie Meurdrac, from the seventeenth century, who was an accomplished chemist and alchemist in her day. Marie's work La Chymie charitable et facile, en faveur des Dames (Easy and Charitable Chemistry for Women) was published in 1666, and offers a vast assortment of home medicines and beauty products for women to produce in their own kitchens.

From stopping diarrhea and back pain, to skin tonics and teeth whitening, Marie offers a range of remedies for concerns that look remarkably similar those of modern twenty-first century households. Indeed, she divides her book up into differing sections, to include precise guidelines of how to adapt kitchen equipment to the chemical processes needed. The first section of the book explains the different processes and operations used in home alchemy the "vessels, lutes, furnaces, fires, characteristics and weights" that will be needed. The second talks about "medical herbs or medicines made from such plants, of their preparation and of the ways of extracting their salts, tinctures, fluid and essences; the third treats animals, the fourth metals: the fifth treats the ways of making compound medicines, with several tested remedies: the sixth is for ladies, in which there is a discussion of the means by which to preserve and increase beauty."

One of the interesting elements of Marie's book is the intended use of her knowledge. At a time before nascent capitalism might start to draw the female body into its sights and as Marx puts it, objectify nature as mere utility, Marie clearly has a different kind of economy in mind. The only reason for publishing her book, she states, is to share her God-given talents and help people. She urges her reader to share and distribute the home-made products, which she is teaching them to make 'presque sans dépense', (almost without cost), among the poor and needy - a free circulation between women that anticipates a kind of Irigirayan entre-elles economy.

While there were two more editions of her work in 1680 and 1711, and translated editions in German and Italian, there has not been any English translation. So here are a couple of extracts for an English-speaking audience. These are probably not for the faint-hearted, so caveat lector...

Promotion of Hair Growth
Take four ounces of chicken fat, hempseed oil and honey. Melt them together in a pot and mix together until they have the consistency of a cream. Rub in for 8 consecutive days.


Anti-Wrinkle Water
Take the juice of a pound of prunes, half a pound of snakeweed root,* six ounces of myrrh, four ounces of crystallized cane sugar, and distill by Cornuë over a fire. Wash face with this water. It tightens the skin and eliminates wrinkles.

Any blog reader might also care to note that she explains it cleans leather too...

*Bistort, the root of which is astringent